Legend of the moose antlers

In 1732 Frederick William I. founded the Royal Stud (Königliches Stutamt) Trakehnen located in the East of his empire. The aim of the Prussian “Soldier King” was to breed his own cavalry horses. The grounds surrounding the village of Trakischken (literally meaning “clearing”), where the stud was to be founded, were cleared and drained. The stud premises were designed in a park-like manner and over time, a state within the state developed, capable of maintaining itself. Spread out over a surface of 10,000 hectares, the stud boasted 16 breeding farms with extensive agriculture, craftsmens’ workshops, a hospital and pharmacy as well as schools and cemeteries. In 1940 approximately 1000 people worked in Trakehnen. At the end of World War II, the Trakehners were forced to flee from East Prussia. A small population survived the trek westwards and thus ensured that the Trakehner horsebreed with its rich tradition would continue to live. The Trakehner Verband (Trakehner Association) was founded in Hamburg in 1947 and is based in Neumünster today. 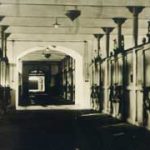 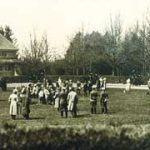 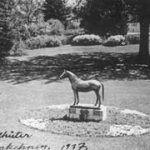